I know it's the day before Easter & I'm just now posting what I've come up with!  But I just have to say that I've been trying to post about these Easter Song posters I had made for last week's Singing Time for over a week now.  For some unknown reason, my iPhoto had a 'puter fart or something.  I couldn't get the pictures I wanted to post at all.  It was very frustrating, because I had everything prepared to share with you & things just didn't want to work with me:)  But apparently all's well today with my iPhoto.  Which is great because now I can share with you what I'm doing with the same songs again for Easter Sunday all in the same post!  WARNING:  This is a llloooooonnnnngggg post!  Hopefully it'll be worth it to you.  If you want a copy of the pictures I used for the posters, they are at the bottom of the post:)

As much as I enjoy holidays, it's just not practical to take the time to really teach less familiar or even new holiday songs.  We spend so much time & effort in teaching the children the program songs throughout the year that it's just not fair to expect them to do the same thing with each holiday that comes in between.  They have Easter, Mom's Day, Dad's Day, Independence Day, & Pioneer Day that all come during the months preparing for the annual primary program.   For these holidays, I like to make big posters to help them sing & enjoy the songs.  I label them with little label stickers & keep them in the closet all year long.  When flipping through posters, I only have to look at the labels rather than lifting & pulling each poster out to see what song it is.  I put a label on each of the 2 long edges so that it doesn't matter how I put them away when finished. 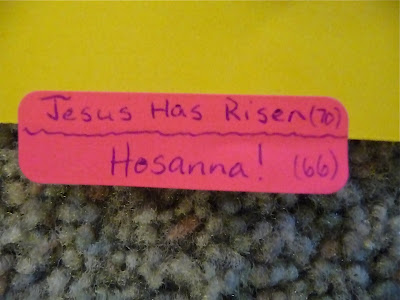 I also like doing the posters because then I can introduce new songs to them.  We get sick of all the same old holiday songs!  So I chose 2 new ones for them to enjoy the first one is Hosanna-Children's Songbook pg. 66.  It has a 2nd part if you want to include it.  I chose to include only the echo parts on the last half of the song.  The "Hosanna" parts I put a smaller size font for the echo.  I also have them do MOST of the echo on the final phrase, 'All hail triumphant King!'.  But we only sing the 'triumphant King!' part of it.  Much easier for them & they loved it!  However, I forgot to type up the smaller font echo part of it.  So they just had to remember to echo it.  I've since fixed it (just last night:) for tomorrow's Singing Time.  I only introduced this song to the Sr. Primary.  It's a bit more complex than the next song I'll talk about.  The Sr. Primary would take turns with half of them being the echos.  They really sang it like echos, too.  They were very soft, yet you could hear them.  Way cool.  They wanted to sing it 4 or 5 times! 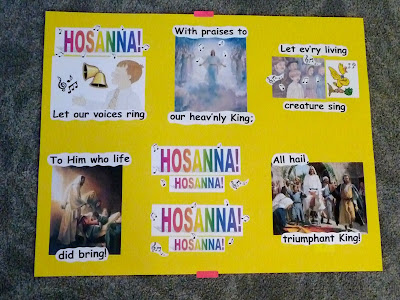 I put the next song on the back of the same poster.  One poster, 2 songs:)  The second song I chose is He Has Risen-Children's Songbook pg. 70.  This one is SO EASY!!  This is the one I introduced to the Jr. Primary.  Sr. Primary sang it as well but they enjoyed the other one much more:)  You'll notice on this song I didn't type every single word that's sung in the song.  I chose the pictures so that it would be obvious what the words were.  I had the pianist play through the song & invited the children to listen to it & even start to hum along if they wanted to.  The 2nd time through, I sang it while they hummed along.  3rd time, I sang & they joined me.  We sang it a few times and talked about the pictures and the meaning of them.  I taught them about the "Repeat Sign".   They enjoyed learning that tid bit and it saved space on the poster! 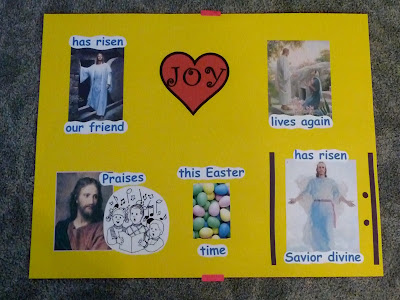 And because we had the time, I pulled out Beautiful Savior-Children's Songbook pg. 62.  I already had the flip chart for it.  They sang it beautifully & brought the spirit into the room to finish off Singing Time & prepare for Sharing Time.  We all love this song!
So THIS week (tomorrow), we are using these same 3 songs for Sr. Primary Singing Time.  The reason it's only for Sr. Primary is because I made Chime Charts so we can add chimes:)  The Jr. Primary loves chimes, but they don't yet understand how to follow a Chime Chart.  So I'll do a different activity for them.  So back to the Chime Chart........I placed the flip chart pages in page protectors.  Using a dry erase marker, I marked the words where a chime was to be tapped.  This way the flip chart doesn't get "molested" with the chimes chart info & can still be used in the future without chimes.  And the page protector can be wiped clean & reused.  I use them all the time for teaching piano lessons:) 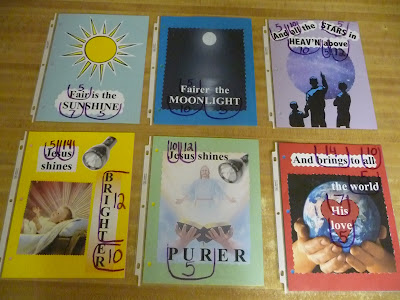 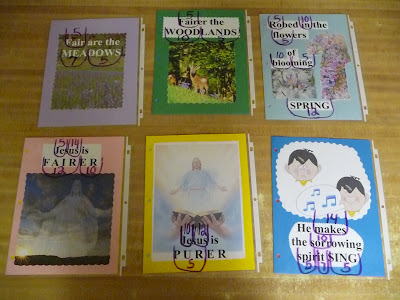 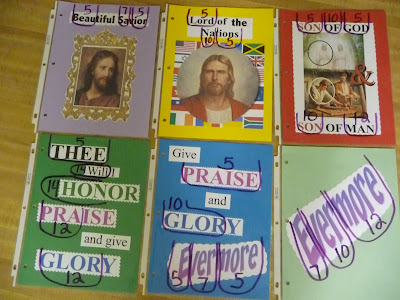 The inspiration for how to do the same thing with the posters was a little more difficult to receive.  But I eventually got it after running out of luck in trying to find cellophane to make a cover to write the chart on.  Then I thought about laminating pouches & taping them together....nope.  Then I thought of just cutting open page protectors to make one long sheet cover.  So that's what I did.  I used 3 page protectors to cover the poster.  With 2 protectors, I cut along the bottom & the binder holes side.   I opened it up with the "bump crease" marking the middle.  Then I cut the 3rd protector on all 3 closed sides to make two halves.  I taped one half to one of the first protector with the bump.  Then I did the same with the 2nd.  I taped what was now 2 long halves together with clear packing tape.  I laid it right on the poster & wrote in the Chime Chart.  Notice how the last 4 chimes are not on any words.  That's because I had forgotten to type up those echos I mentioned at the top of this post.  I've got them on the poster now:)  I'll simply put the poster on the chalkboard & use magnets to keep the Chime Chart in place.  I can save the sheet protector cover for another time! 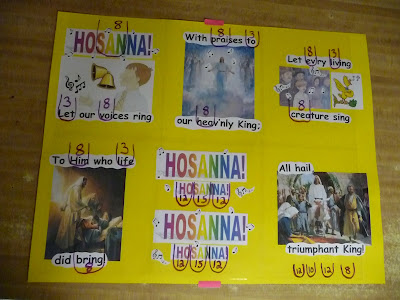 For the Chime Chart on Jesus Has Risen, I did need to write in some words.  I just wrote them on the sheet protector.  This way I didn't have to mess up the original poster.  But this is a simple song so I don't think it'll be a problem. 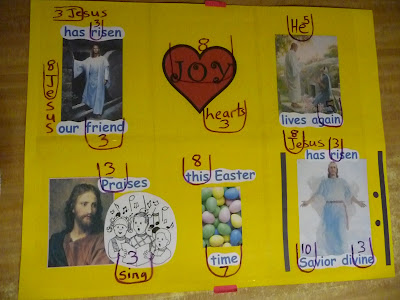 FYI:  I did go onto the LDS website & to lower the first 2 songs.  I LOVE THIS TOOL!!   I use it all the time.  Just know that if you do this, double check all of the accidentals throughout the song.  Sometimes those don't get transposed with the notes.  I lowered Hosanna to the key of 'F' & Jesus Has Risen to the key of 'C'.  The Sr. Primary always enjoy singing in the lower keys, especially.
Here are the pictures of the pdf files I made for the posters.  You should be able to just click on each one as if it were a photo.  Then just copy it off on your printer. 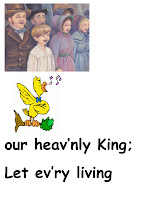 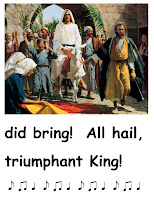 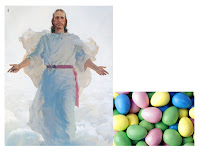 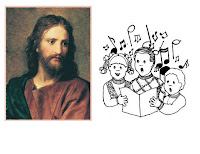 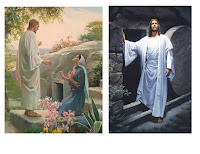 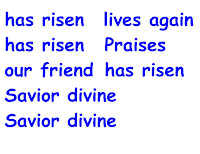 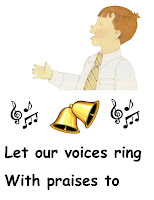 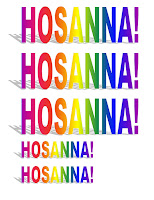 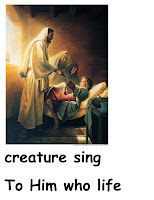 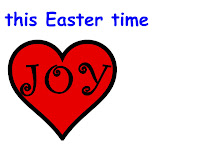 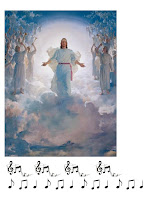