Better late than never, right?!  At least it'll be here for you next year:)  This is a singing time I did both last year and again this year.  This year I used it as a review tactic for the Primary Program songs.  I FORGOT my camera so that I could take pictures of the set up in the primary room.  So I had to recreate it at home & it's not nearly as cool.  But it'll give you the idea, anyway. 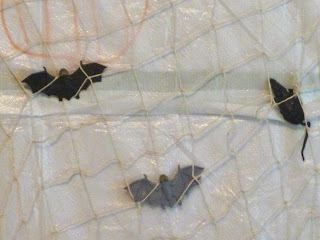 The idea is for the kids to spray silly string at a rat or bat.  Then sing the song assigned to the number on that creature.  Another child will dig for bugs in the goblin's guts.  The type of bug they find is what "bug" you're going to work out of the primary song to make it performance ready. 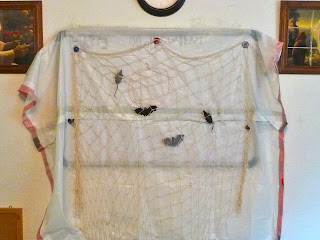 On a large cork board (back of a chalk board), I place 2 kitchen garbage bags that are taped together.  This will protect the board from the silly string.  Then I thumbtack the net/web over that.  I found this fishing net last year at the dollar store during their Luau Season.  Fishing net/spider web.....all the same, right? 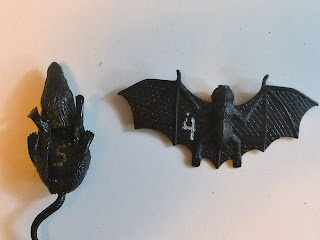 I found rubber rats and plastic bats around Halloween at Walmart.  With a white paint pen, I wrote numbers underneath them.  Each number/creature is assigned one of the program songs.  I wrap them into the web in a way that they won't fall, but are easily removed once they've been "killed". 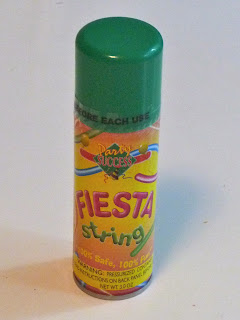 To poison & kill the creatures, we use silly string.  Kids LOVE it! 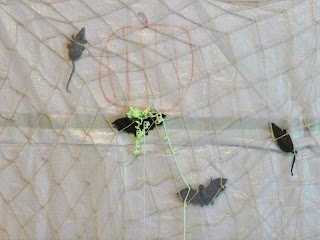 That black bat is DEAD! 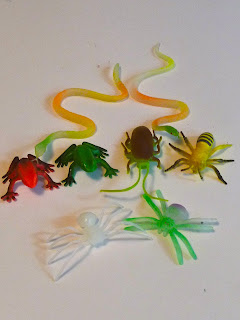 These are the "bugs" in the goblin guts.  If a snake is picked, then we work on standing still (no wiggling) during the song.  Frogs are volume.  Spiders are watching the chorister at all times (no wandering eyes) throughout the song.  Insects are pronunciation or knowing the words of the song. 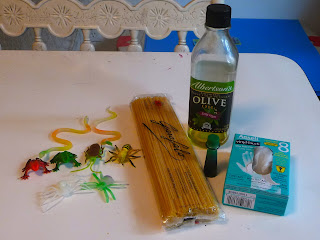 I cooked a package of spaghetti noodles.  After a cool rinse, I added green food coloring to the noodles & stirred until all noodles were green.  Then I added a tablespoon or so of Olive Oil & stirred the noodles around to get them all coated.  I did this to prevent the noodles from sticking together and to make them feel more slimy. Then I placed the green "Goblin Guts" in a large clear bowl.  I added the "bugs" to the guts, hiding them randomly among the noodles.  I provided rubber gloves for anyone that wanted to dig, but not get their hands slimed.  I also had a package of baby wipes & paper towels for clean up for those who really wanted to get into it.
One child is chosen to kill the bats/rats with the poison spray.  While they are doing that, another child comes up to dig in the Goblin Guts for a bug.  The bug they pick is used to work on the song that the poison spray shoots.  We had a BLAST getting the "Bugs" out of our Program songs!  I was amazed at the one Sunbeam girl who is quiet & shy that JUMPED at the chance to dig through the Goblin Guts.  AND without a rubber glove!  She was my hero (heroine) that day:)
Posted by Tifany