Our Savior's Door Is Always Open

I just LOVE 5th Sunday's!!!  I get the entire 35 minutes with each primary.  As I pondered what He wanted me to do for these children, I felt that I needed to help the children understand that our Savior is always waiting for us to open our heart and feel His love.  To prepare for this, I made a poster with 5 different pictures that could depict different scenarios.  I got the pictures from the Friend Magazine.  I then made up stories to go with the pictures.  Two out of the 5 scenarios are open for the children to respond to (only because my brain was fried with trying to come up with anymore & I was running out of time).  I also put 7 pictures of music notes on the poster (4 black & white, 3 in fun colors for the fun songs).  I assigned a song to go with each one.  I glued the 12 different pictures on the poster and cut out hearts to place over them.  I only taped one side of the heart onto the poster board so that it could just be lifted open, like a door, to see what was inside.
I woke up Saturday morning with the song "Our Door Is Always Open" from the Children's Songbook on page 254 in my head.  Weird?  Not for me:)  I wake up with various songs running through my brain more often than not.  And then I always try to figure out WHY they are in my head.  Sometimes I can come up with an answer, sometimes not.  But as I got moving for the morning, words started going through my mind.  THIS is NOT normal!  I'm not a poet by any means.  So I immediately started writing down everything that popped into my head for the next 10 minutes.  Within another 5 minutes, I had new lyrics for the song "Our Door Is Always Open".  Inspired? ABSOLUTELY!!

For our Singing/Sharing Time, I began the lesson by teaching them this "Scenario Song" with the new lyrics.  I made 2 changes with the melody so I re-wrote the music with the new lyrics for my pianist.  Once the kids knew the song, I explained to them that someone would come up to open a heart on the poster.  If the opened heart showed a music note, we would sing the assigned song before choosing another heart to open.  If the opened heart showed a scenario picture, I would then read the scenario to them.  We would then talk about how hearts were opened to feel the Savior's love and then sing the "Scenario Song" before choosing the next heart.

My primary kids LOVED this lesson.  They were sad that we ran out of time before getting to open all of the hearts.  But it is an activity I can pull out again, especially for an emergency:)

If you'd like a copy of "Our Savior's Door Is Always Open", please email me a request & I'll get it to you in pdf form.  Feel free to copy and paste the scenarios below for your own use.  I wrote them on my iPad during Sacrament Meeting and then emailed them to myself to post on the blog:) 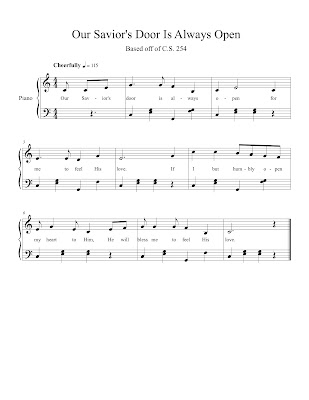 Scenario Phone Girls- Amy went to school with a girl named Emily. They weren't particularly close friends, but they were in the same class. Amy noticed that Emily hadn't been to school all week. She had heard that Emily was sick, but she didn't know the details. Friday after school, Amy felt that she should give Emily a call to see how she was doing. But Amy questioned herself about this because she had never really talked with Emily before. But she was again impressed to call her. So Amy made a couple of phone calls to others in her class to find Emily's phone number. She then made the call. She introduced herself to Emily's mom on the phone. She then got to talk worth Emily. She was nervous, but she asked Emily if she was o.k. Emily explained that she wasn't yet, but her doctors and her parents told her that she would soon be able to return to school. Emily had just gotten home from the hospital the day before. She had just learned that she had diabetes. Emily was still upset and confused about her body's struggle to work right. So she was surprised when she told Amy about it. But Amy told her about her own cousin that had diabetes and how he lived with it. How he was able to play sports and be with his friends and do anything he wanted. This news made Emily feel so much better! She and Amy became good friends and were a great strength to one another.

Scenario Hugging Boy/Father- Jason breaks his father's lawn mower by hitting a large rock. He knows his family doesn't have the money to take the mower to a repair shop. Jason prays to H.F. For help on how he can repair the mower himself. He then went to the garage to search for the tools he might need. He felt the guidance of the H.G. In which tools to choose. Once he had the lawn mower taken apart and could see the damage, he wondered how he could fix it. He again prayed for guidance. A name of a neighbor popped into his head. He immediately went to this neighbor and explained his problem. The neighbor knew what Jason needed to fix the mower and offered to help him. The neighbor had an old lawn mower that he no longer used and was able to use a part from it to replace the damaged one of Jason's mower. Later that night, Jason told his father about this experience. His father was touched by his son's testimony in prayer. He told Jason how proud he was to have such a strong son and how privileged he felt to be his father.

Scenario School playground- Sarah started 5th grade in a new school. Her family had moved from California to Colorado for her dad's work. She was scared to start a new school. She was shy and didn't make friends easily. A group of girls in 6th grade were not known as being very friendly. They scared Sarah and she tried to be invisible so that they wouldn't notice her. But by the 3rd day, they noticed her! Sarah ate lunch by herself and these girls new it. They began to pester her. They'd walk by and just laugh at her. Then it progressed to saying mean things to her.  After a few weeks, they gathered around her at lunch and started talking mean. One girl took Sarah's lunchbox and threw it on the ground. She was being bullied by these girls. She hadn't told her parents about it because she didn't want them to know how miserable she was in her new school. What can she do to open her heart to feel her Savior's love?

Scenario Gossiping Girls- Brianna and M'chaela talking about a girl who doesn't dress as well as they think she should, smells, doesn't have any friends..... How can these two girls make their closed hearts open to feel their Savior's love?

Scenario Coffee- Alison goes to visit her grandmother, who is not a member of the church. Her grandmother fixes her breakfast and serves her a cup of coffee. How can Alison open her heart to her Savior's love & not be offensive to her grandmother?
Posted by Tifany