"The Voice" The Primary Way

I saw a primary chorister's blog post about the way her primary was working on their program songs. She came up with a Superstar Singers chart where the kids worked on specific things to earn stars for each program song.  I thought it was perfect for my primary!


About 6 weeks before our scheduled program date, I asked 3 people to come to singing time to be "The Voice" judges.  If you've watched the actual reality show (which is a huge hit at our house!) you'll understand where I'm going with this.  My husband snagged 3 swivel chairs from the clerks office for the judges to sit on.  The judges turned their backs to the kids before they began to sing.  The judges would then listen for the good and bad things about how the kids were singing the song.  The judges would only turn in their chairs to face the kids if they were singing well.  At the end of the song, each judge would give their advice to the kids about how they sang while I went to the chalk board & wrote it all down.  I took a picture with my iPad so that I could then come up with the categories needed to put on the Superstar Singers chart for the upcoming weeks before our program.

When I first approached the judges to ask them for their help, I explained that I wanted both positive AND negative critiquing. I wanted to save time by working only on what was absolutely needed for each song in order to be ready for the program.  I also sprang this on my primary the week after stake conference.  They didn't get any warning or reviewing before being judged.  That way it was a more realistic result for each song.  I also only chose 6 songs to work on.


I had explained to the kids what we were doing and why. I really drove home the need to know what exactly we needed to work on to be ready for the program, that in order to improve, we needed to know just WHAT we needed to fix. The judges were awesome with relaying their advice to the kids without any negativity, especially when it came to the negative critiques. By the end of singing time, the kids were so glad to have the visual list and see exactly where they stood. I then went home and over the week put together our own Superstar Singers chart. 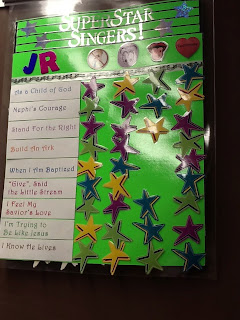 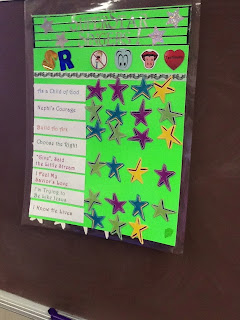 There were 4 categories that both the Jr. & Sr. primary needed to work on. I found pictures online (free clip art) and I laminated them.
We had a couple of kids that would try to out sing their neighbor.
Not pretty! We want to blend as a choir.

Wondering eyes!  The kids' heads turn to wherever they are looking.  So as their eyes wondered, their voices projected in that direction instead of concentrated toward the audience.  Not to mention how silly they look when they're not watching me:)


This one is a bit more tricky.  When singing Choose the Right, they didn't put any emphasis on the "t". So the judges would hear: "Choose the righ, when a choice is placed before you".  Same thing with Build an Ark.  They would hear: "I will bill an arrr before it starts to rain".  So we had A LOT of words in MANY songs to work on in this category. LOTS of tongue work!  I will do a separate post tomorrow on what I came up with to help with that.

It is important to convey to your audience that you believe in what you are singing about.  Music is such a powerful tool! In order for your audience to feel your testimony, YOU need to know all of the lyrics and have a testimony about the words and their meaning.  In a nutshell: Need to cause goosebumps!

This process has been absolutely amazing!  A bit more work on my part, but it has paid off for the kids, I think.  I can use the Superstar Singers chart again and again as I feel is needed by just switching out the songs and categories.  The kids never tired of earning stars, either!

Next week is our program & I am so excited for them to show our ward their love of the gospel!
Posted by Tifany