In my last post, I mentioned having Emergency Singing Time plans for the closet.  This is the first and second one.  I got this great idea from Kathleen from "The Children Sing".  Go to her website to get the run down on how to use the snowflakes.  She also gave out the riddles she used for hers in a second post. 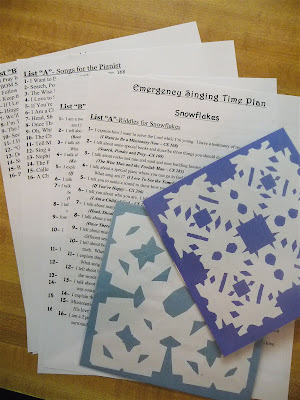 Using her riddles as a guide, I came up with some riddles that would work for my Primary.  I decided to do 16 snowflakes.  What can I say?  I'm an over achiever:)  My girls helped me cut them out when we had a "Snow Day".  I glued them to construction paper and wrote numbers from 1-16 on the back of each one.  I did this so that I can use the snowflakes more than once by numbering my riddles/songs (hence the "first and second" emergency plans).  I ended up making 2 different lists of riddles & songs for each snowflake.  I put the Pianist Song lists on their own pages to be given to the pianist when needed.  The chorister will have the riddle list that also shows the song titles.   Instructions are included at the end of the lists.  I laminated the snowflakes & placed magnets on the back.  For now, I just have it in a gallon size zip lock bag in the closet.  Very visible:)  I let the Primary Presidency know about it & they gave a grateful of a sigh of relief.

Thanks Kathleen for this awesome idea!!