Song of the Heart

At the beginning of the month, I encouraged my Primary kids to learn all 3 verses of "If I Listen With My Heart" by the end of the 4th week.  If they did, we'd have a fun activity day on the 5th Sunday as a reward.  (The Primary President had given me the o.k. to take the full 35 minutes for Singing Time:)  I made this chart with the first picture of each verse from the flip chart I'd made.  As they mastered the verse, a heart was placed on the corresponding side of the picture.  They worked really hard! 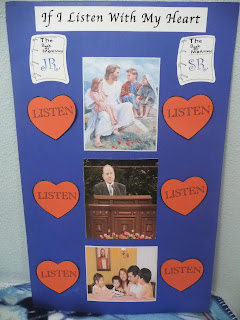 For weeks, my plan was to have a "Game Day" as a reward.  However, as the time drew nearer, my thoughts were prompted in a different direction.  So, as the following scripture as the theme, I was led to come up with a "Song of the Heart" singing time.

I found a short outline called "Singing Powers" online somewhere.  I think I found it through sugardoodle, but I can't find it again to be sure:(  But it comes from an Ensign article called, "Singing Hymns With New Power".  It talks about different levels of singing.
Level 1: Sing the words & music correctly
Level 2: Thing about the meaning of the words.
Level 3: Bear your testimony as you sing.  Sing with your heart!
Level 4: If our hearts are right, the Holy Ghost will testify that what we're singing about is true.
As one who loves music, I have a testimony of the importance of sharing it through the power of music.  I have experienced it time, and time again.  So to begin Singing Time, I asked questions about this scripture.  Like, "What does it mean to have a song of  the heart?"  "What is the song of the righteous?"  "How do we feel the Holy Spirit?"
Then I explained that we were going to learn what the meaning of this scripture is today through singing some of their teachers' favorite songs. 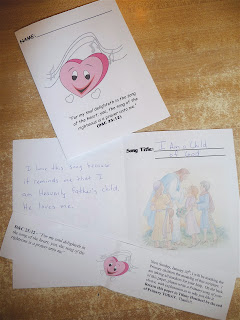 On the 4th Sunday, I passed out the narrow strip of paper shown above to all Primary Teachers/Leaders before Sacrament Meeting.  It had instructions to write the title of a favorite Primary song & why they chose it.  Then they were to hand it back to me by the end of Primary.  During the week, I made cards on a half sheet of paper, as shown above as well.  I took the teachers' responses & transferred them onto the fliers, one song per card.  I chose a picture to represent the song as well.  Did I mention that I'm not an artist?  Thank heavens for clip art!!  Then I folded the card back in half & placed it in the mailbox shown below. 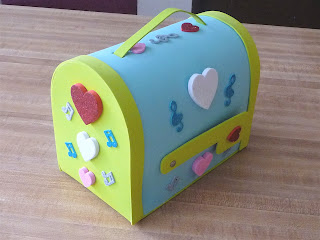 I saw this foam mailbox at Target for $5.  I love it because it's not pink!  I found foam heart & music glitter stickers at Walmart.  Thus the decorations:)

I called on a child to come up & choose a piece of "mail" out of the mailbox.  The Jr. Primary would open it up & pan across the primary room for the other kids to see the picture.  Then they guessed what song would go with that picture.  They guessed right every time!  I then read to them what the teacher said about why they had chosen that song.  We then would sing it.  We sang it 2 or 3 times while I asked them what the words meant.  I also asked them how they would tell someone about something exciting that had happened with them.  You know, they get excited and talk about the details and just can't wait to spill it all!  Then I asked them to sing the song just like that and imagine them telling it all to Jesus.  This is Jr. Primary!!!  I can't tell you how powerful the Spirit was after they sang "I Am a Child of God".  It was amazing & I asked the kids how they felt.  I explained that they sang with all their hearts in a righteous way to our Heavenly Father and that it was so powerful and beautiful that it was just as important to Him as when we say our prayers.  I think they got it enough.  Sr. Primary definitely got it.  Only Sr. Primary ended up working on "Army of Helaman" to tie it all together.  It too, was awesome.  But that's another post.

About halfway through our time, I stopped the singing & passed out crayons & a card for each child.  They got to draw a picture of their Primary song of choice & with the help of the teachers/leaders write the song titles & the kids' names on them.  I explained to them that starting next week, their "Song of the Heart" would be in the mailbox and when we have extra time we can choose one to sing.  We would use it all year long.  They loved the idea!  I love it for another reason as well:  It can be used as an Emergency Singing Time if needed!  Now I have 3 Emergency Singing Times in the closet for the year.

We had time to do a couple more of the teachers' songs before concluding.  I bore testimony of the power of music and the Holy Spirit to testify of Christ.  It was a great experience!
Posted by Tifany