For our last week of learning the 2nd verse of "Build An Ark", I came up with another way to use the Raindrops & Rainbows.  I wanted the Sr. Primary to match each word/syllable to the proper raindrop or rainbow for each part of the song (A, B, C, & D).  I had 4 separate manilla envelopes (one for each part) with the correct amount of raindrops & rainbows and the lyrics/syllables for that part.  I placed an envelope on each of the four tables I set up at the end of the room.  Each group of kids/teachers had 3 minutes to dump their pieces onto their table & match them up.  Thus Mix N' Match.  From the pictures below, I supplied a "Teacher's Guide" in each envelope to correspond with that part for the teacher to be able to see & help the kids as needed. Once everyone had finished their part, they then had to sing that part as we went through the song.  When we finished singing, they would gently mix back up the pieces on their table & then we'd shift over one table (which had all the pieces of another part of the song) and do it all again! We were able to sing the song through 4 times, allowing every group to put together & sing every part of the song one time.  Then we sang the entire 2nd verse together for the closing song.  They did a fantastic job & didn't need any pictures to prompt them through it!

This is a great activity for any song.  It really helps the kids to be able to process the words along with the melody & rhythm in their own minds.  After the first round where they all figured out what they were doing, we were able to rotate every 3 minutes (first round took about 5).  So out of the 20 minutes allotted for Singing Time, about 15 minutes of it was simply matching up the pieces to be ready to sing.  Then it takes just over a minute to sing the verse before re-mixing & rotating.  Doesn't leave much time for "singing"!  BUT even though we were only able to get through each part once, they had it totally memorized within that 20 minutes!  That is quality learning people!


PART A:
Sing the first 2 lines of lyrics for the beginning of the song.
Then go to the next part (B). 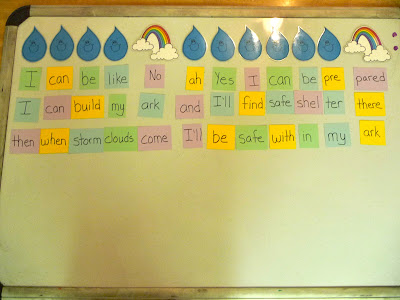 Part B:
Sing both lines, then return to Part A & sing line 3.
Then go to Part C. 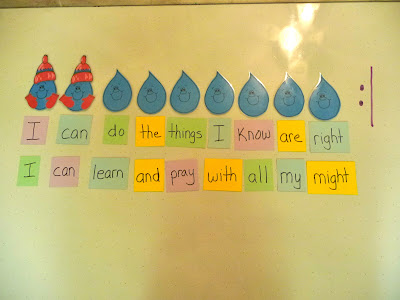 PART C: Sing both lines, then go to Part D. 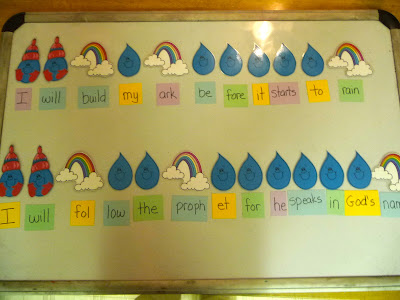 PART D:
Sing the top lyrics of both lines and
then repeat to sing the bottom lyric lines 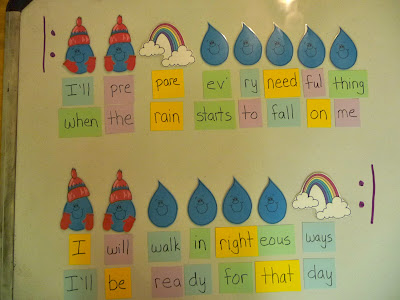 I hope that makes sense.  There's more room on the tables in our primary room than I had using my portable white board:)


To get ready for this activity, I did the following:
On strips of different colors of card stock, I randomly wrote the lyrics/syllables of the 2nd verse.  Why all the different colors?  Because I like COLOR, that's why!  :)  For the words that are more than one syllable, I tried to write each syllable on a different color.  Then I cut out each word/syllable.  Then by starting with Part A, I placed the raindrops & rainbows in the correct order.  I then matched up the words/syllables underneath the corresponding 'drop or 'bow.  Remember that all parts except C, repeats at least once and part A twice.  It took a bit of time to cut out the paper, but really when it was all said & done along with pictures for the Teacher's Guides included, it took about 45 minutes.
Happy Teaching!
Posted by Tifany