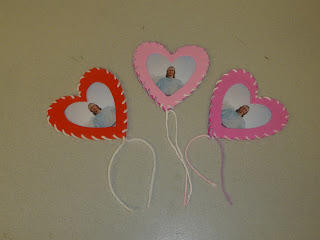 Over the last couple of weeks, I've started singing "I'm Trying To Be Like Jesus" as one of the songs in Nursery Singing Time.  I have a consistent list of songs we do every week.  I wanted to add this song to sing just before the closing song, "I Am a Child of God".  But by then end of Singing Time, the little ones have a hard time sitting back down to fold their arms & become more reverent.  So to help with this, I was inspired to make little foamy hearts with a picture of Jesus in the center.  I felt that they needed to show their love for Jesus by giving Him a hug as they sing the 2 closing songs.  As I passed them out to the little ones, I showed them the picture, explaining that Jesus loves us so much!  We love Him too, and can show Him by giving His "heart" a beautiful hug while we sing about Him.  It was amazing to see how many of the little ones understood the concept & studiously hugged Him to the very end.  One girl wanted Jesus even closer to her that she opened the neck of her shirt & dropped him next to her heart!  Gotta love kids:)


At Joann's, I found a package of 18 valentine foamy hearts.  9 were glittered, 9 plain.  I removed the inner hearts to make the large ones into "frames".  I traced the frame heart onto another piece of foam to create a back.  I then cut a smaller heart to trace onto the picture of Jesus.  I laminated the pictures before gluing them to the front section of the foamy heart.  Some of the babes in Nursery put the song props in their mouths.  Ew, I know.  More than one prophet has bite marks:)  Need to make them slobber proof!  Once the glue was dry, I held the front & back pieces together & "sewed" them together with a craft needle & yarn.  This is to prevent the hearts from being pulled apart.  However, one little turkey pulled the stitches & ripped them out of the heart.  But, you still gotta love kids:)  I tied the two strings in a knot at the end.  I also tied a knot in each string left to prevent the yarn from splitting/unravelling.

I've used these for the last 3 weeks.  The kids love them (and Jesus, too)!
Posted by Tifany