Ping Pong Fun with "As a Child of God" 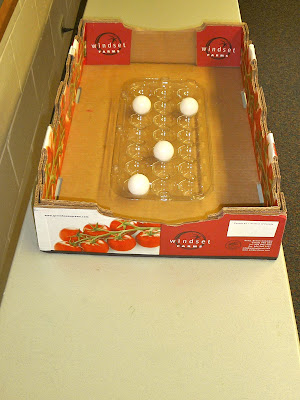 We memorized all 3 verses playing this game.  A child would bounce the ping pong ball once onto the table to get it to land in the container within the box.  However many balls made it into (and stayed in!) the container represented the verse we were to sing.  For example:
1 ball= Verse 1
2 balls= Verse 2
3 balls= Verse 3
3 balls IN A ROW= Child Chooses Song
4 balls (not in a row)= One of the following songs: BOM Stories, Nephi's Courage, I Belong to the Church of Jesus Christ, ...........

Before we start to sing the designated verse, another child would roll the dice to determine how many times the verse was to be sung BEFORE singing the chorus.  This dice was cut out by my husband.  I used a sharpie marker to write numbers 1, 2, & 3 TWICE on it.  (I also needed this kind of dice for the Choose the Right game we were going to play on the 5th Sunday.) 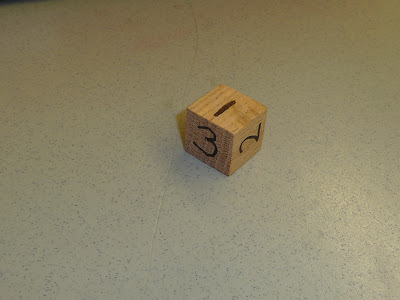 By the end of Singing Time, both Jr. & Sr. had all 3 verses & chorus totally memorized!  We no longer need to even use the flip chart.  WAHOO!!!
The ping pong container is just the lid to the apricots I bought at Costco months ago.  The box is merely to help contain the missed ping pong balls so that we didn't have to shag them from all over the Primary Room.  It help keep the chaos level to a minimum.  When I first explained what we were going to do, nearly all the kids exclaimed, "That's going to be SO EASY!"   Ha!  They quickly learned that those ping pong balls weren't as cooperative as they assumed they'd be:)
It was a fun way to memorize the song!  AND this activity can be used for ANY song, which is even better:)
Posted by Tifany