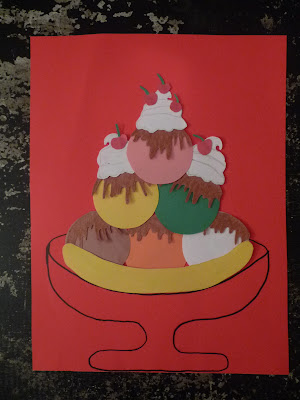 While I had Sr. Primary Singing Time ready for this last Sunday, I was struggling with what to do for Jr. Primary.  I came across an envelope in my Primary Box at home that was full of items I used a couple of months after I was first called as a chorister a year and a half ago.  I had made pieces of different food items out of construction paper and poster board.  I had a different food for each verse of a song the kids had yet to memorize for the program.  This was prior to me starting this blog, so there's not a post to refer you to.  But I distinctly remember taking pictures:)
I decided to use the Banana Split for the 2nd verse of "Build An Ark".  Each part of the song (remember there are 4 distinct parts) was assigned to a portion of the Banana Split. As they learned & SANG convincingly each part, they would get to add specific items to the ice cream dish to build the Banana Split.  I used 1-2 pictures per part from a flip chart to help them along.  But other than that, they had to memorize each word!
We started with the red poster board with a VERY fancy ice cream dish drawn on it by me, obviously:)  I placed it as low as I could on the chalk board.  I had the balls of colorful ice cream and all the yummy toppings poster puttied to a wax paper covered piece of cardboard on the side.  This made it simple and quick to just pull them off & immediately have the kids place them on the dish.  I allowed 1 child per scoop, cherry, etc..  LOTS of little helpers! 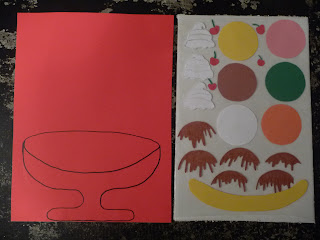 This is how I divided up the song and assigned the ice cream parts
Ice Cream Scoops: The first 2 lines of Part A- "I can be like Noah, YES! I can be prepared.  I can build my ark and I'll find safe shelter there."
Hot Fudge: Part B- "I can do the things I know are right.  I can learn and pray with all my might."
Banana: 3rd line of Part A- "And then when storm clouds come I'll be safe within my ark."
Whip Cream: Part C- "I will build my ark before it starts to rain. I will follow the prophet, for he speaks in God's name."
Cherries: Part D- "I'll prepare ev'ry needful thing. I will walk in righteous ways. When the rain starts to fall on me, I'll be ready for that day."
The Jr. Primary kids were so excited to build the Banana Split!  Several little girl Sunbeams "called" the pink ice cream:)  They earned those scoops really quick!  The Hot Fudge called for a bit more work & imagination before I let them add it.  We finally ended up ASL signing the words "do, right, learn, pray, might" before they passed.  The rest of the song went well and there were only a few kids that didn't get a chance to come up and add a piece to the Banana Split.  But it was a beautifully created Split with dripping hot fudge & melting whip cream.  Some of the Sunbeams claimed it looked good enough to eat!  I whole heartedly agreed:)

Here are pictures of the other 2 food items I had made way back when.  Same idea: a phrase or part of the song assigned to each "topping".  Build your pizza & cheeseburgers (and Banana Split for dessert) while memorizing a program song!  Or maybe just a fun way to review a song later on down the road.... 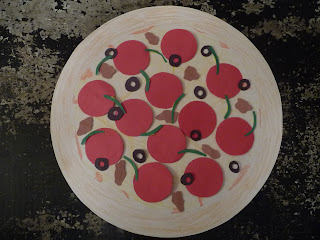 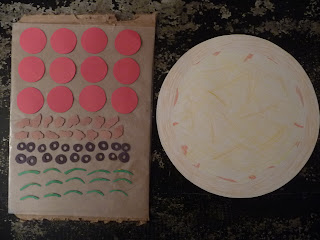 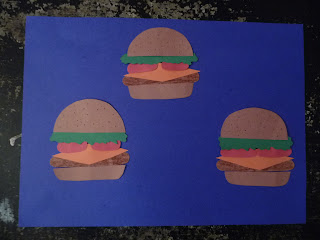 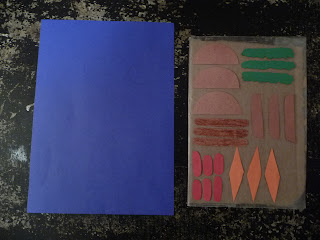 I think I'll go find something to eat now.
This post has made me HUNGRY:)
Posted by Tifany